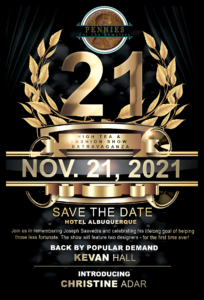 Join us in remembering Joseph Saavedra and celebrating his lifelong goal of helping those less fortunate. The show will feature two designers – for the first time ever! 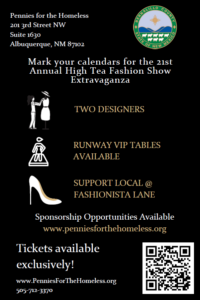 ‘Pennies for the Homeless’ founder dies of COVID-19

Friends of Joseph Saavedra often talk about the time he found a sparrow with a broken wing and helped it to “soar again.”

“I think that’s a metaphor for what he did for people who were down and out. … He would take them in, and he would help them to soar,” Aragón said.

Saavedra’s decadeslong crusade to help the homeless ended Feb. 19 when he died of COVID-19 at his home. The founder of Pennies for the Homeless was 66.

Aragón, a friend of Saavedra’s since 1980, called him “larger than life.”

Saavedra, a hairstylist by trade, went on to use his expertise to hold local fashion events geared toward helping the homeless even as he struggled, at times, through a debilitating illness and bouts of homelessness himself.

“He fought so hard to succeed and do the best that he could with his life,” Aragón said. “He had incredible willpower to be able to survive and change his circumstances.”

Saavedra, an orphan, was raised by relatives in the Barelas neighborhood, where he struggled through bullying and abuse.

“I think all of that molded him to relate and care deeply for those who are discarded in society, or cast aside,” Aragón said.

Saavedra opened a salon in the ’80s in town before taking his skills to Palm Springs, California, where he did hair for celebrities. Aragón said Saavedra returned to Albuquerque to “find purpose in life” and started Pennies for the Homeless in 1993 with late District Judge Diane Dal Santo.

The organization sought to educate the community about homelessness while raising money for local shelters, meal sites, day care centers and other homeless services with the message that “every penny counts.”

In 1998, Saavedra started the High Tea & Fashion Show that would fly in clothing designers from around the world to sell their designs and raise money.

Jennifer Bean, treasurer of Pennies for the Homeless, said Saavedra “lived and breathed” the fashion show and was behind the scenes the whole time doing hair and makeup. The annual event has raised an estimated half-million dollars for the Albuquerque Public Schools homeless project and dozens of other programs.

The event was put on hold in 2017 when Saavedra was struck with a “vicious virus” that nearly took his life and left him in a wheelchair for some time. Despite the hardship, Saavedra took that stage at the fashion show one last time in 2019.

“He was scared, he didn’t want to because he was afraid he would fall. But he did it anyway and he walked up those stairs and he was so emotional and humbled by the entire experience,” Aragón said.

Leading up to his death, Bean said Saavedra had been extremely excited for Bernalillo County’s Tiny Home Village, donating $16,000 from his charity and offering to do the residents’ hair for free once it opened.

“It’s just heartbreaking,” she said. “… People that knew him were so blessed to have known him.”

Bean said that the “show must go on” and that a High Tea & Fashion Extravaganza is planned for Nov. 21.

“He would want us to; that’s his legacy, he would be freaked out if we didn’t do it,” she said.

Although Saavedra was her hairstylist, Aragón said, he was also “a brother” and so much more.

“I will miss his spirit. At every one of the milestones in my life – my wedding, my retirement party – he was my biggest cheerleader,” she said. “I’m going to miss that.”

The Foundation Board of Directors has voted and approved to fund the shading structure for the development. The steel base structure will be 16’ x 16’ x 10’ and will help provide a comfortable outdoor living experience for the residents.

“As the co-founder of Pennies for the Homeless, it is our ongoing mission to help end homelessness. Although our community is facing the effects of COVID-19, we are able to continue our mission of helping the community. We will continue to help the community and support the agencies that help this vulnerable population,” said Joseph Saavedra, President of the Board of Directors.

Pennies for The Homeless continues its mission to fight homelessness. The never ending commitment and tenacity for raising money for homeless programs in Albuquerque and in other New Mexico communities offers hope for a better future for New Mexicans. 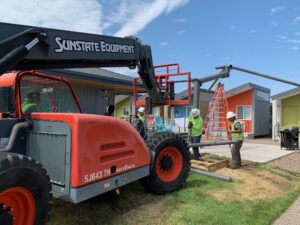 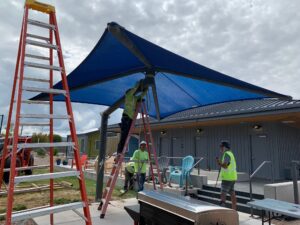 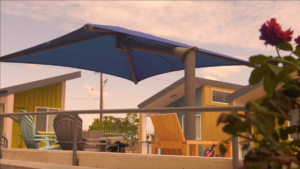 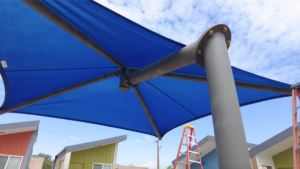 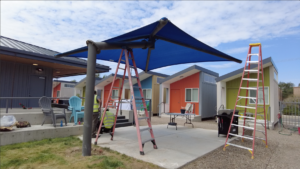 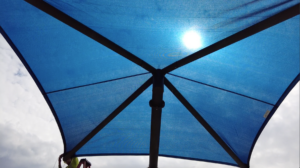 For more information on the organization, visit www.PenniesForTheHomeless.org.

About Pennies for The Homeless

Pennies for The Homeless is an all-volunteer, non-profit 501(C)(3) organization founded in 1993 by Joseph Saavedra and the late honorable Diana dal Santo, former District Court Judge. The Board of Directors consists of a small group of local business people who are dedicated to the fight against homelessness, and the hope for a better future. The foundation has worked with communities throughout the State of New Mexico.

Thanks to the generosity of an anonymous donor, this year we will have a Pennies for the Homeless Art Sale! More information will be coming soon. Over 20 unique pieces will make the perfect holiday gift!